The "Tooth Fairy" is comin' 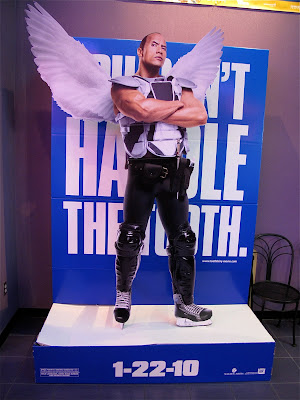 Dwayne "The Rock" Johnson was standing at Eagan's Regal 16 movie theater advertising his upcoming movie, "Tooth Fairy." The story follows a minor league hockey player who is turned into a "Tooth Fairy." Other cast members include: Julie Andrews, Billy Crystal, and Ashley Judd. The film premiers on January 22 in Eagan and other locations. Dental floss & toothpaste not included.
www.toothfairy-movie.com
Posted by Leif Hagen at 6:00 AM

This is one very likely tooth fairy! Must be a fairytale. Hairy fairy? Anything to to with Fairy Potter? Strange.

Larger than life, I suppose.

If that tooth fairy came into my room as a child I would have been so terrified I'd rather have swallowed my teeth than put them under the pillow to summon that guy.

Looks funny,but I think he is not an angel! :)
Dear friend, thanks again for your always kind words, it brought me a positive energy, and I really appreciated it!
:) God bless you
Léia

Funny! He may not be the best actor, but I like "The Rock".

I think I would have never allowed my teeth out of my mouth if the tooth fairy looked like that! It sounds like a funny movie though.

Wait! «Louis» thought there were TWO tooth fairies, one named Harry and one named Nancy, working for Wizard Obama, bringing me Health Care!

(Pay no attention to the man behind the curtain, iron or otherwise...)

I don't believe I've heard about this movie yet!

ha! that's funny, I can't imagine the rock as a fairy.

So this is the guy that left me quarters under my pillow? :D

This is so cool, been thinking about a lady fairy when talking about tooth fairies ... woah! the gender insensitive me ... I'll watch out for this ... thanks for sharing.

I think will be watching this movie soon with my niece.

Cool! Never heard of this movie yet. If it is for general patronage, sure my kids will love it.

Hi Leif: Thanks for stopping by my blog.

Love the photo in your banner. While you’re shivering in the snow, down under we’re baking in the sun.

A macho tooth fairy! Whatever next? That’s a real twist on the theme.

Takes a really tough, self-confident dude to carry off those wings!

A quite bulky fairy, but I think the Rock can pull it off!

I think he's cute, but I'm keeping my teeth. I'll see the movie to see him!

If he removes teeth like other hockey players, no thanks.

I'm sure he will win another Oscar for this role.

:) Sounds like a silly idea for a movie; I'm curious to see if the Rock can pull it off. 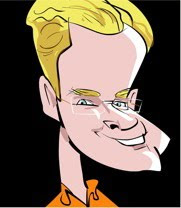